I got in a game recently against my co-blogger Colonel Fazackerley, we're taking part in a little tournament of local gamers, playing the Forge the Narrative missions. This game was mission 4 from that pack which is the diagonal deployment setup, the primary objective is 6 objectives setup evenly across the board which are scored cummulatively with the winner the first to 8 points (but with the option of a draw if both achieve 8 in the same turn), the secondary objective was the Emperor's will, and the tertiary objective was slay the warlord. The usual 3 additional GW objectives also counted. 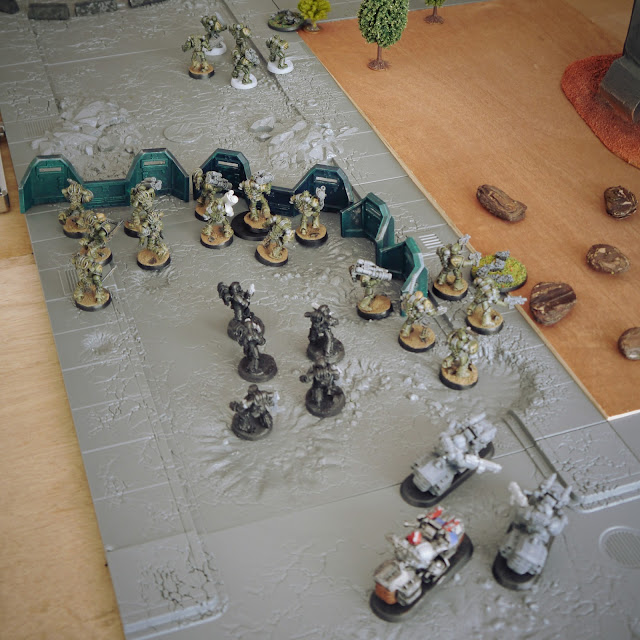 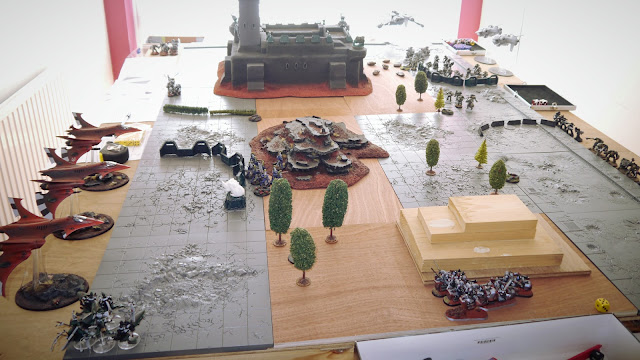 Turn 1.1: I shuffle around a bit, don’t really do much.  Score 2 primary objective points. 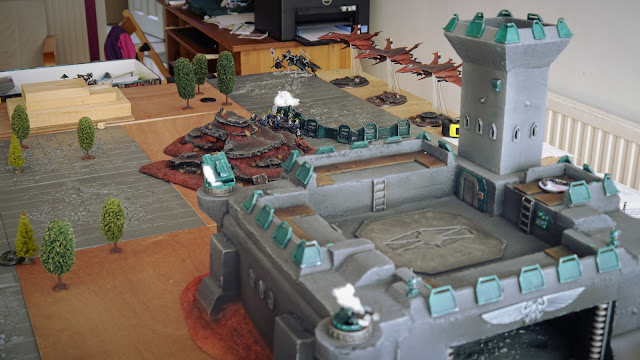 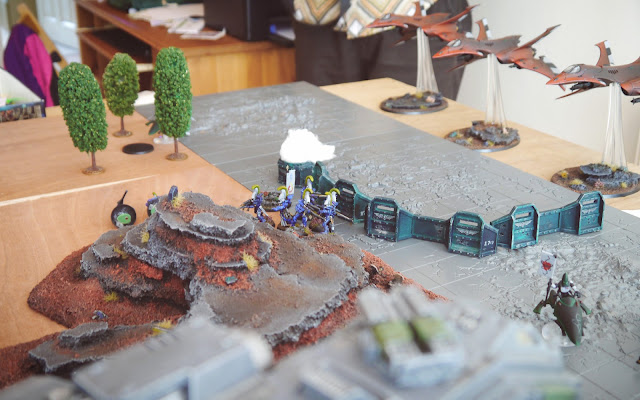 Turn 1.2: CF does the same, casts conceal on his jetbikes (I don’t yet know what this does yet, see below).  Scores 2 primary objective points. 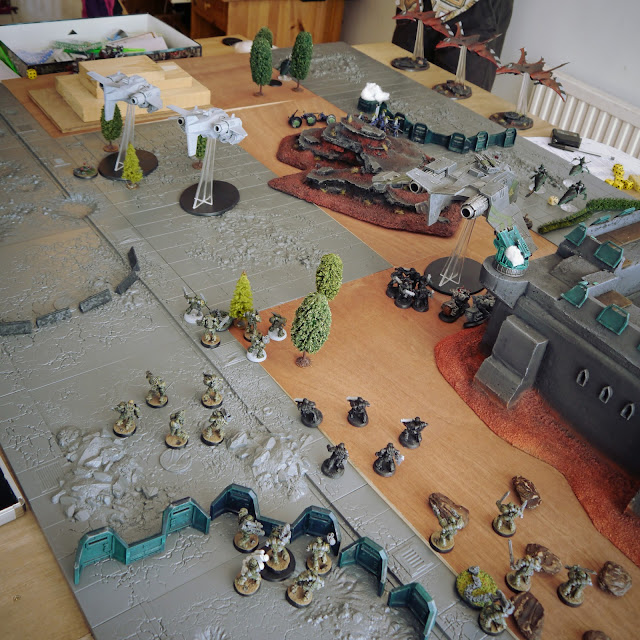 Turn 2.1
All my planes and termies arrive. I go bold with the termies and try to deep strike them in behind CFs lines, they scatter just enough for one to clip the table edge and mishap, CF places them in bottom corner with only his bikes anywhere near.  My Sternguard jump out of the Storm Raven and land fine.  Most of my firing goes into the jetbikes, but due to their Conceal and Jink they have a 2+ cover save so I don’t do much.  Score 2 primary objective points. 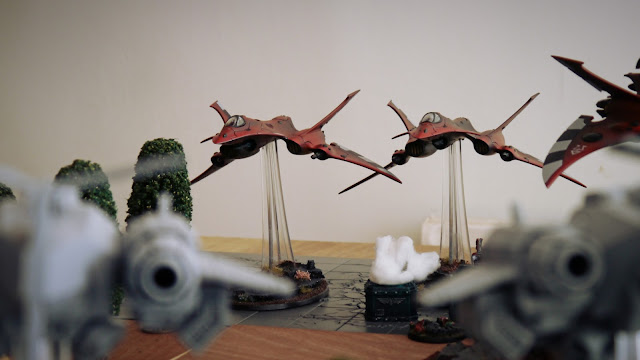 Turn 2.2
CF’s planes come on and despite jinking (and I struggle with 4+ cover saves all game), blow both my Storm Talons out of the sky.  The third plane kills my bikes that are out in the open because I was gunning for his jetbikes.  The Bikes fire on my termies but do nothing.  The rest of the army moves around a bit and shoots some but does little damage otherwise.  CF’s Devastator squad has climbed the big fort so is scoring 3 objectives this turn putting him one ahead. Looking forward I need to make sure he doesn’t score 3 next turn otherwise he will win primary. 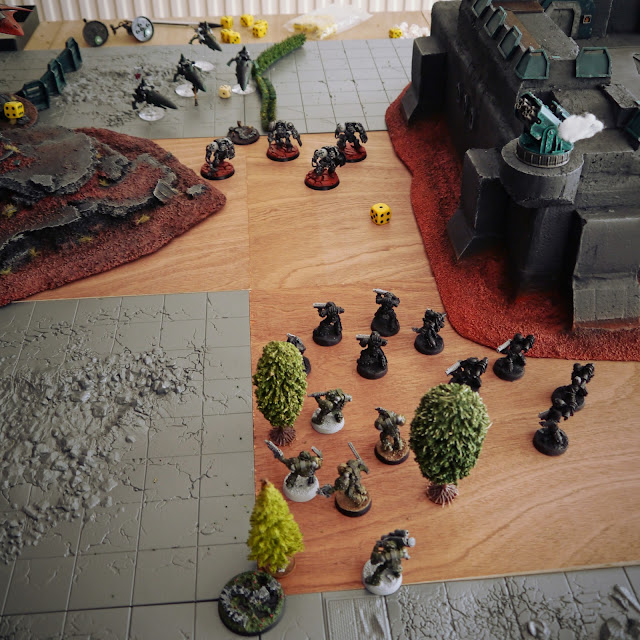 Turn 3.1
My Stormraven moves to be out of sight of Eldar planes as much as possible (starting a dance that will last the rest of the game), but can use turret to still target them forcing two of the planes to Jink to reduce their shooting effectiveness.  My Termies move up to attack the Bikes, and the rest of my army advances to get maximum firing ability on CFs Terminators who landed midfield in the previous turn.  Most of my armies shooting kills off a few of the Terminators.  I manage to kill off a few models so CF is only scoring 2 primary objectives.  My Terminators roll box-cars for their charge so the bikes cannot escape and are annihilated.  Score 2 primary objective points. 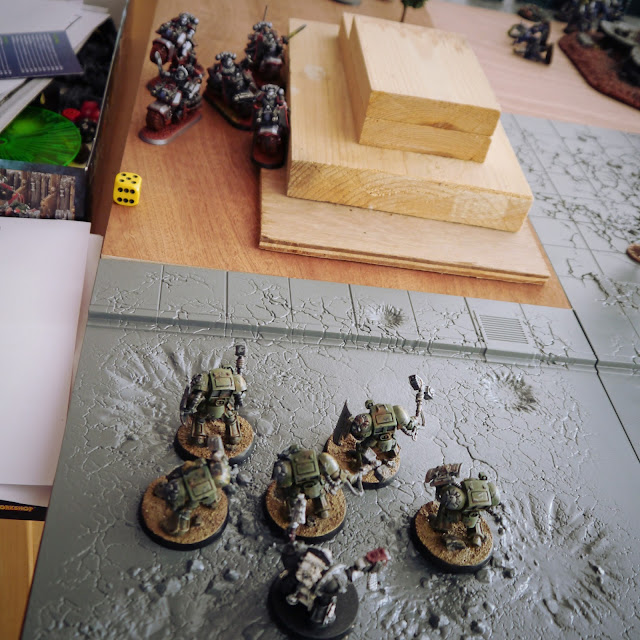 Turn 3.2
There's some shuffling and shooting, I lose a few guys, but no squad is destroyed.  Amazingly, despite the planes targeting a 5-man Tac squad in the open with all their AP2-3 shots, the 6+ FNP of the Iron Hands, and the Warlord trait I rolled (everyone can use my Warlords Ld) definitely does work for me and the unit refuses to die or run away.  CFs Terminators are advancing on my “base” to disrupt. 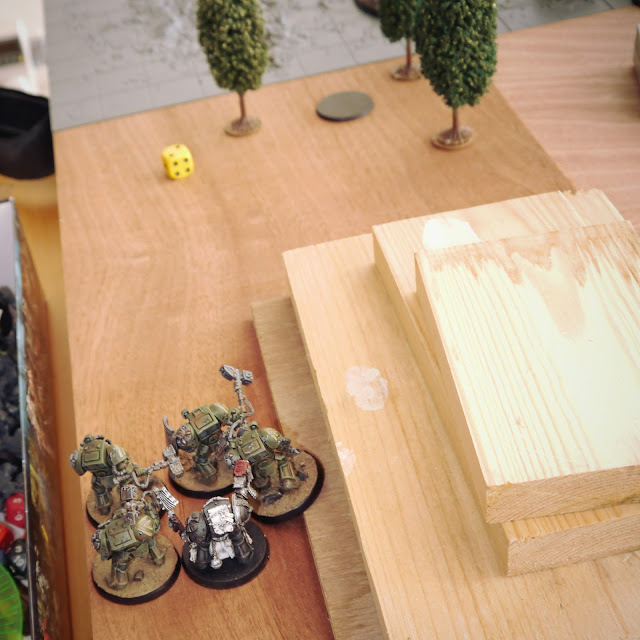 Turn 4.1
My Terminators advance on the left and clear off CF’s home objective.  The Storm Raven moves around again, trying to keep out of the way of the Planes.  Some shooting takes down one of CFs Terminators, but otherwise I can’t do much other than force 2 of the planes to jink again. 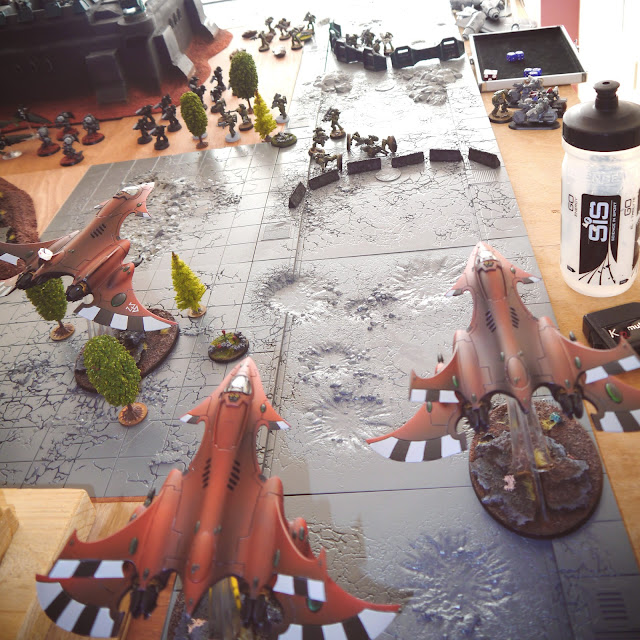 Turn 4.2
CFs Terminators charge one of my Tac Marine units.  More of CF’s army moves back towards his home objective to take out my Terminators.  CFs shooting does little.  Amazingly, my Tac Marines are charged by the Terminators but don't die in the combat!

We are both over 8 points on the primary objectives at this point (I have 8, CF has 9), so the points for the primary are shared.

Turn 5.1
I do some general shuffling but there’s little left I can move, or want to otherwise I’ll not be controlling my home objective.  Amazingly, my Tac Marines still don’t die in combat with the Terminators and actually manage to kill one of them.
Turn 5.2
My Terminators who have been protecting CFs home objective are gunned down by the Captain on Bike, Dire Avengers, and one of the planes.  There's just my Chaplain left controlling CF’s objective, an heroic last stand.  CFs Terminators finally kill my Tac Marines, perfect as they’ll be open to more shooting next turn. 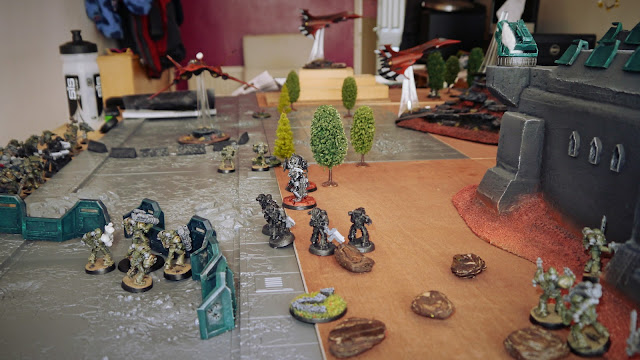 If it ends here, I’d be holding both home and away objective.

Turn 6.1
I barely move, there’s no need.  I should have moved my units around my home objective to completely block off a 3’’ area around it so it couldn’t be contested.  My Storm Raven goes into hover to block off CFs objective and protect the chaplain.  I take out the terminators near my home objective with massed bolter fire. 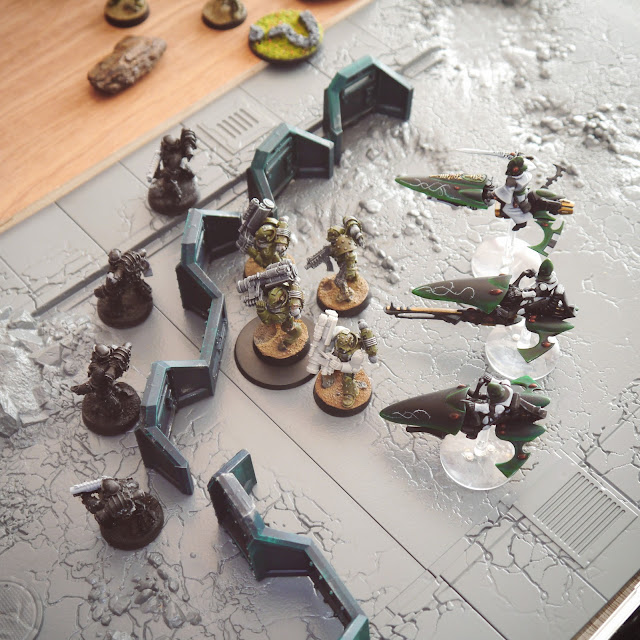 Turn 6.2
Because I hadn't properly moved my guys around my objective, the jetbikes jump across the table and are now contesting my home objective.  What shooting that’s left doesn’t really affect my home objective.  All the shooting at the away objective finally kills off my Chaplain, gaining him Slay the Warlord and the Tertiary objective. Crucially, CF didn't move his units close enough to his objective to contest it. 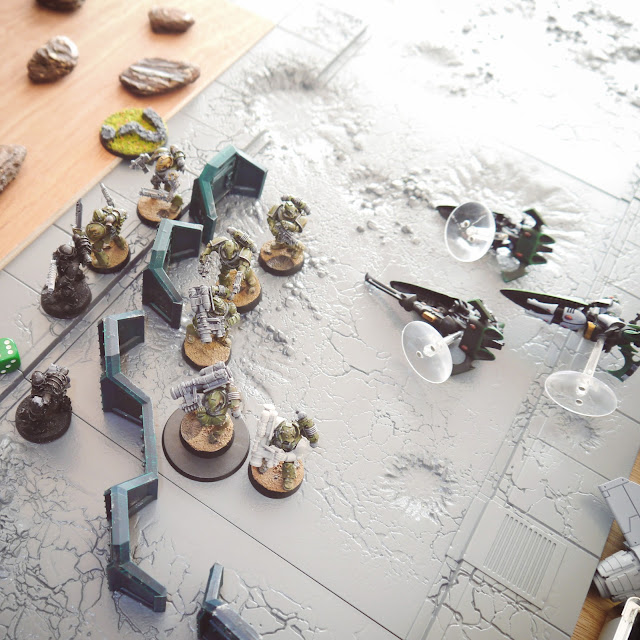 If it ends here, I’m holding the away objective (hovering Storm Raven), and the home objective is contested. 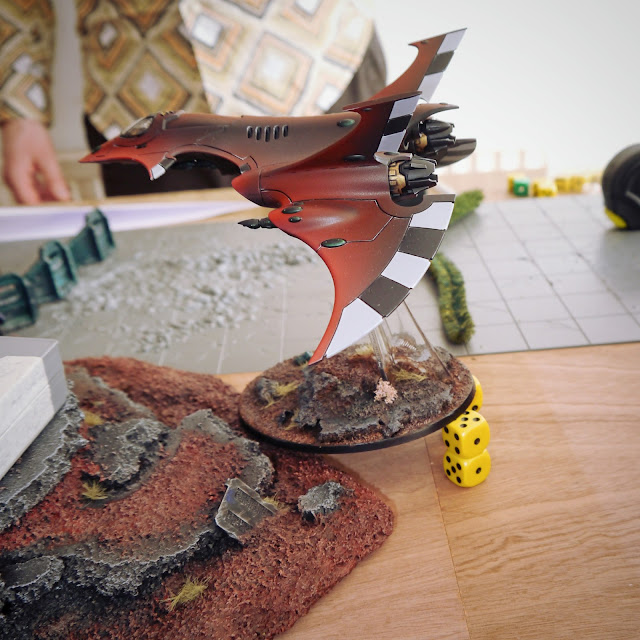 Turn 7.1
Again, no movement as I’m where I need to be.  My army shoots at the jetbikes wiping them out so I control the home objective again. 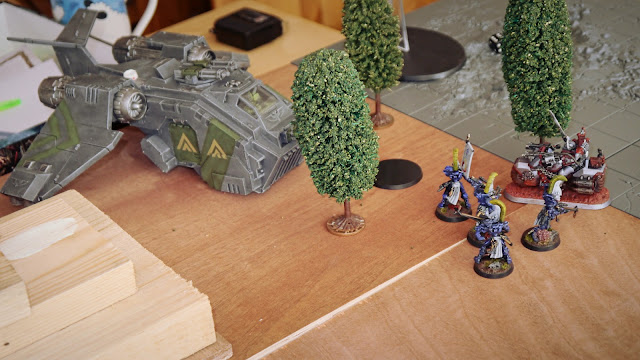 Turn 7.2
There’s nothing CF can do about my home objective as I’ve got 3+ units in range to contest, 2 with ObSec.  All the shooting at the other end of the table kills my Storm Raven, and the Dire Avengers and Captain on Bike run in to claim that objective.

It ends with a draw on the secondaries, both claiming 1 each.

A very good game, cagey due to relatively evenly matched armies. There were a few significant points that really affected the outcome of the battle:
How I'd do things differently if I were to play the game again?
CF played the game better than I did, and his added mobility meant I was always chasing.
That said, if it had ended any time other than turn 7 and I’d have won on the secondaries and wouldn’t have lost my warlord.  I probably should have sent my bikes around the other side of the large castle to keep them protected so they could cause trouble in his back field.  If I’m adapting this list, it’d be good to have more mobility.

My final thoughts are on the psychic phase. This is really the first time I’ve faced up to the new psychic system, and I’m not a fan.  While I get that I only have the D6 dice to try and stop powers, it just doesn’t really feel like there’s any strategy in it.  Needing 6+ to cancel warp charges, unless you have loads of psykers to bump the number of dice you have, means that in an average turn you can at best block ONE warp charge. Anything that is cast with more than a single charge is effectively unstoppable, and difficult to stop even if you have a bunch of psykers in your army. I agree that an army like CF’s with more psykers should be able to dominate the phase, but the ability to harness so much more easily than deny meant that it was just another phase in which as the opponent you are an observer rather than taking part. I much prefer the system from Fantasy where you add up the values on the faces of the dice rather than using thresholds, you really had to consider how many dice you put towards dispelling in that system, even if you had an army with little or no magic. Perhaps if dispels were on 5+ rather than 6+ it might make it a bit more interactive because chances were better, or if rather than having to match the casting value, each dispel nullifies one of the harnessed charges so you can bring a successfully harnessed power back under its casting value - this would lead to an element of bluff and double-bluff between you and your opponent, do they throw extra dice so you can't bring the value back under the casting value, or do they chance that you are holding on to reduce the casting of a different power.