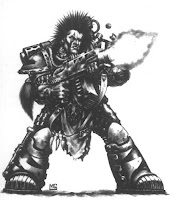 After a game a few weeks back when my wolf-scouts were stars of the show again, a guy down at the local club challenged me to come up with a 1750 list with as much outflank in it as possible (limited to the SW codex and the models I own).

I've only managed to get in 2 games with it so far, but I'm quite enjoying playing it as it is somewhat different and it confuses players as they aren't sure how to deal with it.  I thought I'd post it up here and a few thoughts on it, to see what others thought of it. 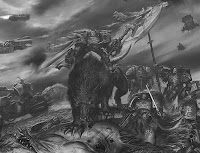 
The two games I've played have been at 1750 points so to fill in the gap, I've loaded up on a foot terminators to chug forwards and give my opponent the un-enviable choice of either staying back and facing the scouts, or coming forward to face the terminators.  I'll also add that this list could easily be more optimised, but is based solely on the models that I can field.

As far as thoughts on the list go:
Scouts:  These have performed fantastically in both games, easily causing more damage than the other elements of the army.  They've been very useful as their ability to arrive from any board edge 2/3rds of the time give a lot of flexibility.  Their only downside is the classic of anything that outflanks, their arrival is unreliable at best regards to timing.
Battle Leader:  I want this guy to be good, but he just isn't.  As I've argued before, I feel that Space Wolves HQ's should work in tandem with other elements of your army, not be death stars as they just aren't good enough to do that.  In my two games he's taken 9 rounds of combat to kill off 3 war walkers against an Eldar army, then died to shooting, and was tarpitted by gaunts in a second game before being killed by a monstrous creature.  I'm trying to figure out how I could replace this guy.
The core:  Yes, it is Razor-spam, but I had to fit a few troops into the list, and needed some kind of fire power with a bit of range and this was the obvious choice of how to do it, net-list or not.  The lascannons on the Razorbacks and missile launchers of the Long Fangs provide my main ranged fire power, generally sitting towards the back of the field, slowly moving forward (in the case of the Grey Hunters) and trying to de-mech as much of my opponents as possible or take down the larger targets like monstrous creatures.  The Grey Hunters are there for claiming objectives mostly, but with their upgrades can pack a decent enough punch if they have to get into combat.  They die quickly though if they don't get rid of their opponent in the first round, or if they are caught out in the open.
Added Terminators:  although on foot, I haven't really had any problem getting these guys across the board to where they are needed in my two games as the Razorbacks tend to shield them in the first couple of turns till they are mid-field.  They haven't performed all that well when they have got into the enemy, but I wonder if I've just been picking the wrong targets for them.

Anyway, let me know what you think, or if you think I'm a fool.  Its not the easiest list to play, and I'm certainly not a great general to run it but its fun and a bit different and has definitely added new flavour to playing my Space Wolves.  Cheers - Andy